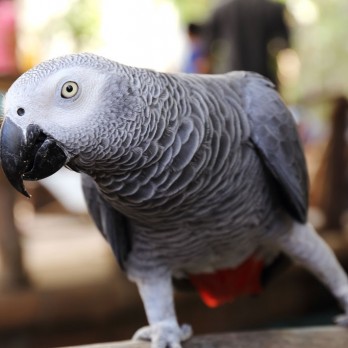 We all love our pet parrots – or at least that’s the way we start off. Unfortunately a parrot has enough intelligence to resemble a three year old child, and just as much capacity to mould our behaviour to get what it wants! But if we parent our parrot well, we end up being the teacher (or trainer) and the parrot behaves as we like, not the other way round.

Animal training is all about positive reinforcement, that’s basically rewarding good or desirable behaviour, and ignoring bad behaviour. When I say ignoring bad behaviour – that doesn’t mean you can’t use a phrase like “no” or “bad boy” to let your parrot know you aren’t pleased with him. But that is where it should stop, if you give him more attention then you are in effect rewarding him for the bad behaviour, encouraging him to do it again!

One key factor to remember is that complex desired behaviours may need to be broken down into smaller steps to achieve the final goal – your three year old may not know what you goal is, so may need the process simplified (letters first, then words and later sentences).

We had a cockatoo in a large aviary once which had a habit of flying and landing on people’s shoulders, then nipping their ears. Not unreasonably one keeper would put up his hand to push the bird away, with mixed results! The cockatoo saw this as a game and quickly learnt which keeper he could have most fun with. In the end the keeper could not go into the aviary without getting bitten. A second keeper, with the same cockatoo, responded differently and gently lifted the bird off her shoulder onto a perch. She then left whilst ignoring the bird, returning a few minutes later to stroke and ‘play’. The cockatoo then learnt, surprisingly quickly, that it would get attention by not jumping on her shoulder and nipping. A treat of a peanut or similar was given as a reward and this helped to reinforce the desired behaviour.

Once a bird starts to respond to you and understands that he will get a reward when you are happy with him, then you can start using a simple word or phrase like “good boy” to let him know he is doing well. Say the same phrase every time you reward him for something good. Once he understands this, you will find he does not need to have a treat every time as a reward, as he knows he will get his treat sometime soon. Then you must remember to deliver it of course.

If you have a parrot (and cockatoos are major culprits here) which screeches and shouts at the top of his voice, one tip would be to darken his housing for a few minutes until he has settled down (I recall an old aunt putting her Budgie to bed each evening before her favourite soap started on TV, otherwise he would chatter away all thought the show). You could do this either with a cover over the cage, or by turning the lights off and closing the door, but remember to reward your bird when he is quiet and not when he is making the noise.

Some parrots develop very undesirable behaviours which are detrimental to their welfare. The most significant of these is feather plucking which is very distressing to owners but often is an indicator of something very wrong with the parrot.
Sometimes the plucking is seasonal and can be associated with hormonal changes; at Birdworld we have a couple of parrots who pluck a few breast feathers each spring as they are thinking about nesting. This is not severe plucking and the feathers regrow after the nesting period.

We receive a lot of calls from people wanting to rehome their parrot and more often than not the bird has a plucking issue at some level or another. The owners clearly love their birds and are quite upset at the thought of rehoming them but have usually come to the conclusion that they are not able to stop the bird self-plucking. In many cases, discussion shows that the home environment for the bird has changed significantly – a family member has left to go to university, or has left through death or divorce. These events can be very stressful for a pet parrot; it is like losing a key member of its flock. It is also a time when perhaps the family cannot devote so much attention to their bird, after all the human members of the flock are dealing with the changes too. It is at times like this the parrot may exhibit some signs of stress by pulling out its feathers. Often an owner will inadvertently reinforce this behaviour by paying more attention to the bird when they see the adverse behaviour and ‘rewarding’ it without realising. This simply encourages more plucking and makes the problem worse. Making time for a parrot during stressful times is really important to prevent such problems, remembering to focus on positive behaviour and interactions with rewards at every opportunity. Make sure your bird still has a flock leader and friend during times of change.

Of course, feather plucking can be caused by other factors, including mites which cause irritation and discomfort. In reality, bird mites are not likely to infect birds with limited contact with other birds, but if you suspect this then a quick visit to the vet would sort it out (try to make sure you know where your local specialist vet is before you need them).

Poor diet is another factor which can lead to feather plucking and general bad temper in your parrot. Making sure you provide the correct diet for your bird can be complicated but you can follow some of the basics; pick a diet which is easy for you to deliver, a good quality proprietary mix appropriate for the species is ideal (Bucktons’ have good options here). Do not feed so much that your parrot can select its favourite food items and leave the less favoured items. A blended parrot feed is developed with the intention that the bird eats all of the included ingredients. If you allow your bird to self-select, it does not matter how good the diet offered is, key elements of your bird’s nutrition will end up in the waste. You might be able to observe which ingredients your bird favours and pick these out of the mix to use as training treats. Another mistake to avoid is buying too much of your preferred parrot food at a time. I once re-homed an African grey which had only recently developed a plucking problem, it came to me with no flight or tail feathers and a bald back and front. The owners handed over a large sack of food which they had been using so that the bird had its usual diet after the move. Interestingly the sack had a use by date on it which was three years out of date. I discarded the food and offered a similar fresh mix, as well as lots of bonding time and six months later, the Grey was able to fly and looked much much better. He is not perfect but is certainly well on the way to making a full recovery and monkey nuts are still his favourite reward treat.

Questions? Need some help? Ask away!

Find one near you